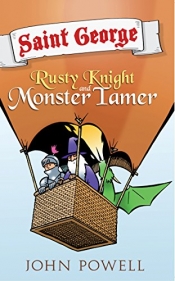 There are monsters loose and untamed. They have caused many problems. However, when Knight George discovers the trick to calming the monsters, he becomes extremely valuable to King Freddie and Merlin the Whirlin.

From games of Cricket, to bagpipe issues, to raising monsters, come follow George and his trusted companion, Jack, and see the adventures they endure!

Sometimes, I really enjoy a good children’s book. I like to see what is out there and available for the younger crowd. As an added bonus, some of them are really good.

In this book, there are nine stories (one story per chapter) that shows the adventures of George and his variety of monsters. The monsters in the book are not in the least bit frightening. If anything, they are silly and just your average pets. Though not many are described, we meet some bongloppers, Loch Ness nellies, woggalogs, and more. The trick that George found to tame them is something called Marmorgugelhupf cake, a cake from Austria.

The stories presented here are meant to be cute and fun. These are not meant to have big valuable lessons taught, and most chapters can be read as a standalone short story. Topics referenced include global warming, the Titanic, leadership roles (i.e. Prime Minister), the Olympics, and others.

Unfortunately, being an adult, I started to become uninterested in these stories during the last third of the book. My attention wasn’t sustained, and for me, the ending couldn’t have come sooner. Part of this is the chapter that is mainly about the game, Cricket. Children may not know this game, I certainly am not familiar with the rules and the different positions, so I found it hard to keep focused during this section.

Aside from my attention, I found some of the text inappropriate for children. For one, there are phrases used here that are not English. It seems to me phrases such as “nouveau gateau de Cherburg” and “mal de mar” are perhaps French. I know some Spanish and little Italian, neither of which helped me to decipher the first phrase, while the second one I have a guess. In other words, those who would like to read this book with their children, you might want to look up these phrases and/or words.

I will also caution that there are quite a few references to what is underneath a man’s kilt. In particular, I found it rather odd that within one chapter this was mentioned two or three times.

Lastly, there is a clear reference of one person becoming drunk. Depending on the age of the child, some parents may not want to have topics as private parts and getting drunk as jokes. I know I would be concerned if things were said to their peers about these topics.

I received this eBook from OnlineBookClub in exchange for an honest review.