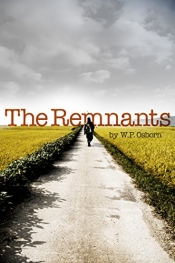 out of 5
OBC Rating: 3 out of 4 stars
Themes: Love, Loss, Loneliness, Fear, Betrayal
To Learn More About the Book, Click: The Remnants on OBC Bookshelves

Danny and Rose fall immediately in love the first time they meet in the early 1900s. However, their quickly growing passion for one another is interrupted with World War I approaching, and Danny has to enlist. With promises to wait for him, Rose is left alone and unsure of Danny’s whereabouts, while Danny has a tough time adjusting to becoming and being a soldier.

Wow! This is something that I haven’t read before, and I’m sure glad that I did. This is a story that not only speaks about love, but the true hardships during war time. The heartache. The suffering. The fear. The loneliness. Everything you would imagine (if you haven’t experienced it) that war would be like for both men and women, this novel dives into.

There was a touch of “Downton Abbey” here, which I love, but the book goes even further than that. The author was not afraid to vividly describe the conditions that both the men that left and the women that were left behind lived through during this tough time in history. There were moments that made my heart ache and there were moments that made me cringe. It really opened my eyes more to those who suffered during wartime.

Though I was displeased when the loneliness overtook some people in this book, this was reality. It was hard on both sides to keep faithful, at times, especially when some relationships start off so young. However, everything was wrapped up nicely and I was left with a sense of awe by the end.

As a ‘fun’ fact, the author shares that this book describes his grandparents’ story, which is touching and makes the story even more meaningful.

Unfortunately, there were several errors scattered throughout the read. There were missing punctuation, missing words, added words, and sometimes awkward sentences. If it wasn’t for the errors, this book would have easily received a top score from me. But, errors in a novel are very distracting and can be easily fixed.

As a warning, there are some graphic scenes in the war front, much profanity, and a few sexual scenes.

2 thoughts on “The Remnants by W.P. Osborn”

Homemade red velvet cake pops for GoT last night! Show ended okay, but the cake pops were super yummy 😋 #cakepops #dessert #redvelvet #homemade #baking #baker
Next round of baby aloe plants are on their way! So crazy how many plants this mama plant has produced so far 🌱 #plants #gardening #nature #planting
Grateful to have a backyard again to read and chill with Zoey in 🏡 #grateful #home #reading #doglovers
My version of the White Walker Dragon Cake! It was also yummy and very fun to make!! 😋 #gameofthrones #baking #whitewalker #cake #dragoneye #bakingforfriends #seasonpremiere
Just some homemade brownies that were super yummy!! 😋 #homemade #baking #brownies #kitchenaid #bakingforfriends
Our little girl on the day of her tooth surgery 🙁 She's feeling much better now though! #dogsofinstagram #love #dogs