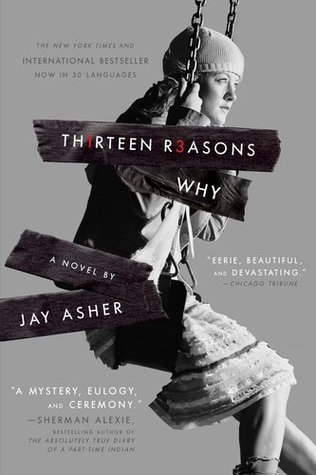 One day, teenage Clay Jensen receives a very curious package. When he opens it, what he finds has no words – it’s Hannah’s tape recordings prior to her suicide. Broken-hearted, will Clay be able to listen to them? To hear her final words?

After some contemplating, he decides that he has to hear what Hannah had to say. By listening to these tapes, Clay gets to know the real Hannah…the one he might have loved…

Teen suicide is not a topic that is a pleasant one to talk about or even think about. For a teenager, who has barely begun to live, to think that the only way to stop all of their hurt is by ending their lives is just so very sad.

Everything about this read was perfect. It dealt with suicide well, by not necessarily focusing on the how, but on the why. The double narratives, Clay and Hannah’s tape recordings flowed extremely well together. But, above all, the author’s message was clear – don’t be afraid of talking about suicide, look for signs that someone might need help, and help them.

One of the things that struck me about this read was how one simple rumor…a stupid thought, really…can spiral into something so dark so quickly. It is this one rumor that creates a domino effect in Hannah’s life.

I can also see both Hannah and Clay as being extremely relatable to today’s teens. Hannah – lost, hurt, insecure; Clay – unsure, shy, kind. They represent a population that is not necessarily in the “popular crowd”, but those who take a backseat in other people’s minds. Hannah was disrespected and mistreated, while Clay was treated well, but distant. Funny enough, I can relate to Clay fairly well in my high school years. The popular crowd knew who I was and didn’t mind working on projects together or even saying ‘hi’ once in a while, but we weren’t really friends. This is how I picture Clay, respected, but not really close to many. Hannah, I’m sure, represents many teens out there who just don’t have the support they need when things start to spiral down.

Honestly, the only “negative” thought I have for this book is to be careful in whose hands it falls in. I have never experienced suicidal thoughts, but I had a friend in high school who was a bit unstable and cut herself once. Of the two of us, if we were to read this book in high school, I would have similar thoughts to what I have now (sad, reflective), while with her, I would be afraid that she would like Hannah’s recording idea and perhaps consider taking her cutting to another level.

As far as the main elements in a good book is concern, Asher was on target with this one. The main characters were well-developed and likable, the message was clear, the plot flowed extremely well and was presented excellently, and it was definitely professionally edited.

Overall, I really, really enjoyed this thought-provoking novel. This has inspired me to look into the author’s other works, as well as, to check out the new Netflix series.

4 thoughts on “Thirteen Reasons Why by Jay Asher”