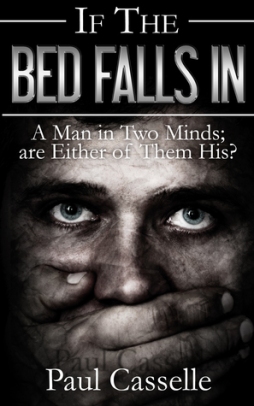 out of 5
OBC Rating:  2 out of 4 stars
Story Perspective: Alternating Third-Person
To Learn More About the Book, Click: If The Bed Falls In on OBC Bookshelves

*This was part of the OnlineBookClub.org Book of the Day Program and is reviewed for the Blogger Review Program*

Is he Tom, a depressed photographer with severe hallucinations or Joseph, a M16 assassin suffering amnesia? Tom/Joseph just can’t get a handle of his situation. People overlap in both lives and everything is mixed together. Will he ever learn who he truly is?

This was another read where I was confused as to whether or not I enjoyed it. The concept of one man trying to grasp reality and understand what is real and what is not was completely intriguing to me. In the beginning, there was definitely a sense of confusion of what was going on, but I believe that was intentional. I thought the author did a fairly good job on keeping the reader guessing on which storyline – a depressed photographer or an M16 assassin – is the true one. I know I was flip flopping throughout the read.

However, the writing was a bit bland and simple for me. There were several instances where every sentence in a paragraph began with either a character’s name or an article, which made the story choppy at times. On top of this, when Joseph the assassin, gave a couple of speeches/monologues under intense situations, I found myself rolling my eyes. I felt that the author was trying to show this man had a heart and compassion, but it didn’t feel genuine and it felt kind of out of character for him. There was also a scene where a number of agents come together to discuss the next step in their plan, and honestly, it felt like high schoolers trying to decide who had what role. Again, another eye-rolling moment.

Unfortunately, there was also a severe lack of character development. With this and the jumping back and forth between the “two” men, it was really difficult to connect with anyone. This read sort of felt like a bunch of characters thrown together to make a novel. It almost felt like the focus was too much on the switching between Joseph and Tom, which made it impossible to relate and feel compassion for any character.

Though, I must say that one of the most frustrating aspects of this novel was the ending. It just seemed convoluted and unresolved. At this point, I’m actually not sure if I fully understood what happened.

Overall, there were times when I was excited to read this and other times, my interest petered.