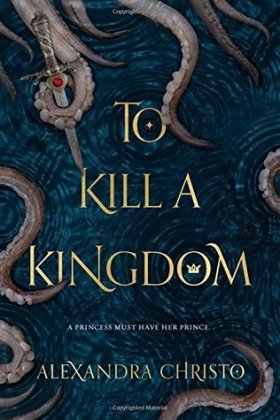 This book was given for free, courtesy by NetGalley
and Macmillan Children’s Publishing Group.

Young Lira is of siren ancestry and is next in line to become queen. However, it seems that no matter what she does, she will never be good enough for her dangerous and cold mother, the Sea Queen. After crossing the line, Lira’s mother punishes her by making the young girl a human, the very thing the sirens hunt. In order to return back into a siren, Lira must return with the siren killer’s heart or remain a human forever.

Part-prince and part-pirate, Elian wants nothing more than to live on his ship, Saad, hunt sirens, and not become the next king of Midas. As he is on his mission to finally eliminate the Sea Queen by the use an old tale, he finds a young girl drowning in the middle of the ocean. After rescuing her, Elian can sense that there is something different about her. Can he trust her? But, the ultimate question is – will he be able to get rid of all of the sirens once and for all?

I want to thank NetGalley and the Macmillan Children’s Publishing Group for giving me a free e-book copy of To Kill a Kingdom, in exchange for an honest review. It was one that I have seen on several blogs, and it captured my attention.

Though the two protagonists can come off as fairly strong-willed people toward the beginning, I found myself intrigued by their snappy and almost cocky attitudes. It was enjoyable to see how the two interacted and how their relationship grew overtime. In addition, the author gave a good amount of background for each main character, which in turn made it easier to understand the emotions and conflicts they each faced.

The plot was fairly steady throughout. Some of the plot was exciting, some of it was straightforward, and some was just enjoyable to read. I did find a few of the author choices predictable, but this didn’t take away from the overall enjoyment of the tale. The relationship building was cute and not overbearing. There was some world building in the siren world, but not an excessive amount. At the end, though I found the action sequence a bit long, it was still exciting to see what would happen next.

One of the aspects that I felt could have been improved was to have better point-of-view distinction. Both Lira’s and Elian’s perspectives were written in first-person. There wasn’t a clear indication of which chapters belonged to which character in the beginning of each chapter. Most times, I would have to read a few paragraphs to figure out who was speaking. I would suggest to either label each chapter with the character’s name or perhaps maybe writing in the third-person point-of-view next time.

As a warning, there were murders and a fair amount of blood mentioned. I didn’t find it too bothersome or too intense, but I can see how it may cause some issues for some.

Overall, this is a quick and fun read that I enjoyed and was happy to read.

I would recommend this book to those who enjoy dark fantasies where two characters from two different worlds collide.

2 thoughts on “ARC Review: To Kill a Kingdom by Alexandra Christo”

The Happiest Baby on the Block by Harvey Karp

Lady Almina and the Real Downton Abbey
by Fiona Carnarvon