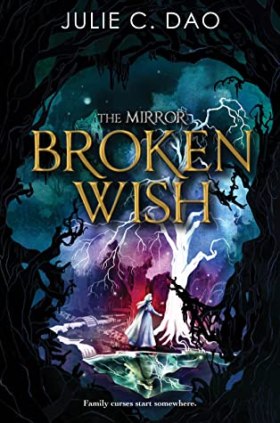 Thank you to the NetGalley and Disney-Hyperion for giving me the opportunity to read and review an ARC of Broken Wish.

After a broken promise, years pass and sixteen-year-old Elva holds a secret that no one must know about. She can see into the future when looking at reflections. However, looking for assistance with her magical abilities, she meets the witch of the North Woods.

Though the witch of the North Woods should be feared, Elva can’t help but get close to the seemingly lonely witch. After some hard decisions and a series of poor events, Elva wants to set everything right, but will it be too much for this young witch?

Thank you to NetGalley and Disney-Hyperion for giving me the opportunity to read and review an ARC of Broken Wish. I have not read anything from Julie C. Dao before, but I must say that I like her storytelling. This book has the essence of Disney stories, but with a bit of a darker ending.

I really enjoyed the characters within this book. Though not everyone was fully developed, the reader can get a sense of the personalities of each character. The most developed character I would say is Mathilda, the witch of the North Woods, and she was one of my favorite ones in the entire book. Her ability to cast spells is something that she’s made some mistakes with, but she has a genuine heart. However, so many can’t see pass her past mistakes, which I think speaks volumes to the theme of acceptance in this book.

Aside from the theme of acceptance, there is also a great lesson about not caring what others think. So much of Mathilda’s loneliness was what others may think about those who spend time with her. Because townspeople called her a witch, going to Mathilda’s house “wasn’t okay.” However, when getting to know Mathilda better, it’s easy to see that she’s misunderstood and people were simply afraid of her.

Due to this being a Disney fairy tale, there were several plot points that were fairly predictable. Without giving too much away, breaking promises lead to severe consequences and dabbing into too much magic can lead to some devastating results were a couple of predictable story beats. In addition, there were certain characters who appeared one way and then we learn their true colors. These were also not very surprising.

With all of this being said, I did enjoy reading Broken Wish. I especially thought it was cute that the author gave a small nod to the Brothers Grimm here. I will definitely look into Julie C. Dao’s other books!

I would recommend this quick read to those who enjoy fairy tales written in a Disney-style way with a bit of darker ending.