The merrow who angered Poseidon

The man who loves her

And an evil that could destroy them both

Lena—who was born as a merrow but walks as a human—is now in possession of the Magiske Skal: the shell once owned by the queen of the merrows. With its power comes untold danger, and should it fall into the wrong hands, the Fosse-Søfolk will face an evil they cannot overcome. Lord Jarl knows what Lena has, and he wants it for himself.

After running away from the Lundby-Wyatt Inn, leaving behind everything she was familiar with, Lena finds herself in the company of the warm and kind Soren Emil.

When the villagers turn against her and Soren, they’re forced to leave the burning Bror Boghandel behind and escape to a forgotten cottage on the edge of the shore, where no one will find them. Lena knows she must get the shell back to the sea and destroy it, before it falls into the hands of Lord Jarl—or worse, his possessive apprentice, Jace Wyatt.

With the help of some unruly pirates, Lena and Soren journey to the sea, where Lena thought she’d never return. There, she will have to face not only the Sea King’s army, the Fosse-Søfolk, but the impossible choice to sacrifice her own life, or the life of the man she loves to keep the Magiske Skal from the evil that craves it.

What will Lena choose? Who will win the struggle for power?

Lena sat up in bed with a gasp. Her heart was pounding in her chest and she could barely breathe. As she darted her gaze about the room, she noticed a strange grey cloud lingering all around her. Lena took in a deep breath but began to cough on the strange pungent scent in the air. Her eyes stung as she searched the darkened room.

There was smoke…so much smoke.

Lifting her arm up to cover her nose, she tried to look around the small living-area again, but the fumes stung her eyes. Everything was cloaked in the thick grey cloud. Involuntarily, she sucked in a breath before immediately coughing again, choking on the thick smog that was quickly filling the area around them. What was happening?

Just beyond the stone wall of the Bror Boghandel, Lena could make out the echoes of rising voices off in the distance. Whoever they were, the ringing of their voices drifting through the walls seemed rather ominous.

“Soren!” Lena gasped, pushing herself from the bed. Lena coughed and slid to the floor. At least there, she could breathe better again.

After a small evening meal, Lena had spent a few hours going looking over the letters Soren had begun to teach her, while he sifted through a few of the books he’d taken from Edwin’s room. She had even seen him dig out the small broken white opal stone he possessed from his mother, to gaze at it more closely. He leaned over the books on the table, comparing the sketches in the pages to the stone in his hand. At some point amongst his research, she’d given in to sleep. He must have put her to bed, for she was still dressed in her blouse and skirt.

“Soren!” she hissed as she closed her eyes; they were beginning to water against the stinging air. She could hear the voices off in the distance, and she carefully tried to make out what they were saying. But it seemed they were too far away.

Taking a quick breath, Lena began to pull herself across the floor; her fingers acting as her eyes.

“Soren!” she tried again, choking on the swirling air around her. Her chest began to grow tight as she continued to crawl toward his still, sleeping form on the floor. Just as her fingers grazed over him, he moved, startled.

“Lena?” Soren’s voice broke through the darkness. She saw the shadow of his head move, seemingly taking in the surroundings before reaching for her. He lifted the blanket to her face. “Don’t move this away. We’ll die if we breathe in too much smoke.”

She obeyed and slid her hand to hold the blanket in place.

“We have to get out of here,” he managed, lifting a small blanket to cover his own nose and mouth. The smoke had already begun to sting her lungs, reminding her of the first time she broke through the sea’s surface. She remembered the way her lungs fought between fresh air and salt water. She wanted to take in a deep breath, but knew she had to resist.

“I’m going to grab what I can,” Soren murmured, gently taking her arm and leading her to the door. “Stay in the shop. I’ll be right there.” With her heart pounding in her ears and quick thinking, Lena moved back toward the nightstand, grabbing her nightgown before turning on her heel and reaching for Soren’s brown jacket that hung near the door. Both might come to be useful wherever they’d need to go. She shoved her feet into the extra pair of boots left by the door and slipped into the bookshop.

“Why is this happening?” Lena asked softly, her voice wavering from fear. What is going to happen? She stood shivering despite the insufferable heat that was burning its way through her last safe haven. Taking in another breath and promptly choking on the thick smoke, she couldn’t help but look around her. All of the books… all of the stories and ship logs she would now never learn how to read. Over her shoulder, she could hear the sounds of Soren rustling through the stacks of books.

Squinting through the dark and hazy air, Lena could only make out Soren grabbing various things and shoving them into a small cloth satchel. Lena held the blanket against her nose and mouth, trying to breathe in whatever air she could. It wasn’t nearly as bad in the shop, but she could make out the shadows of strangers through the windows, just outside the main door. Their voices echoed throughout the shop. She turned her violet gaze back to the darkened doorway. Her heartbeat echoed in her ears.

“Soren,” she called out softly. “Soren!”

Ahead, she could hear more of what those gathering outside the doors of the Bror Boghandel were saying: “Come out here, bookkeeper! We know you’re in there!” Lena darted toward the door. Were they here to help? She reached for the latch but froze when she heard another voice just on the other side. “Come out little pearl,” Lord Jarl’s voice rang. “Everyone knows the truth.”

Lena’s heart sank to her stomach. She felt frozen, despite the licking flames beginning to engulf the small book shop from the side. Lord Jarl had come for her after all, and he hadn’t stayed in hiding for long. Was Jace with him? Lord Jarl’s words echoed in her ears, as she allowed the realization of what he’d said to fill her. Everyone knows the truth. They all knew she was a merrow. Her fate was sealed. Her fingers began to tremble, and she swallowed hard, her throat thick with smoke and unshed tears as she gripped the blanket against her nose. They all know. They were all here for her. 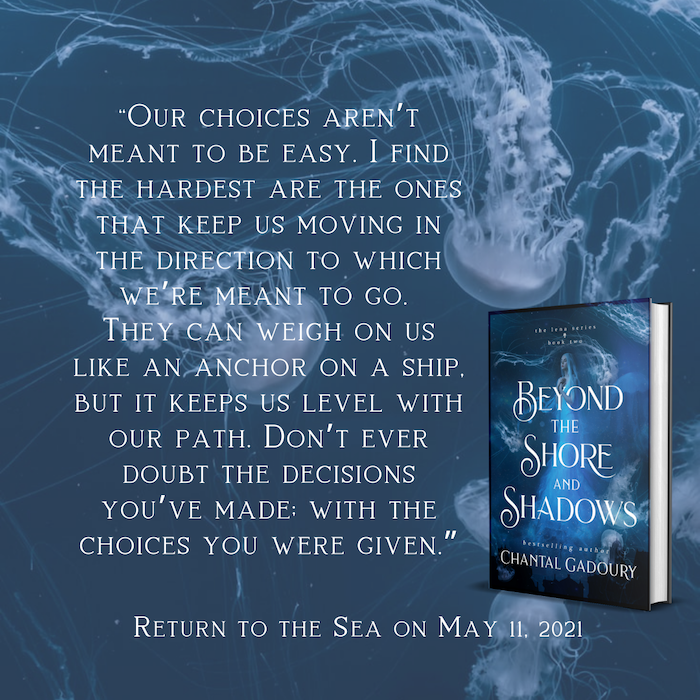 Amazon Best Selling Author, Chantal Gadoury, is a 2011 graduate from Susquehanna University with a Bachelor’s Degree in Creative Writing. Since graduation, she has published “The Songs in Our Hearts” with 48Fourteen Publishing, and “Allerleirauh” with Parliament House Press, with future titles to follow. Chantal first started writing stories at the age of seven and continues with that love of writing today. Writing novels for Chantal has become a life-long dream come true! When she’s not writing, she enjoys painting, drinking lots of DD Iced Coffee, and watching Disney classics. Chantal lives in Muncy, Pennsylvania with her Mom, Sister and furry-‘brother’ (aka, puppy) Taran.